Obituary for Vincent A. Agostino 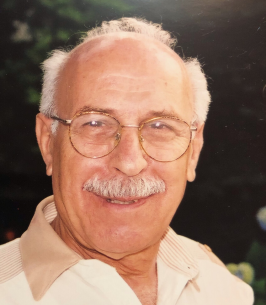 Vincent Anthony Agostino"PaPa" a devoted husband, father , grandfather, brother uncle and friend, passed away on September 14, 2022 at the age of 98. Vinny was born on July 28, 1924. He was the son of the late Julia and Frank Agostino and late brothers and sister Doninick, Rocco, Rose and John Agostino. Vinny was the husband of Carmela "Millie" Agostino. They were married for 72 years and resided in Brooklyn all their lives. Vinny loved coaching his sons in Little League Baseball at St. Athansius for many years.He enjoyed going to Atlantic City, playing cards and his his lottery tickets, but what he enjoyed most was spending time with his family. Vinny was a WWII veteran and served his country in Belgium and France for 2 years. He worked for the federal government as a communications specialist for 36 years. Vinnny is survived by his wife Carmela "Millie", his sons Vincent
(wife Diane), Thomas (wife Patricia), Bruce (wife Linda). Vinny loved his grandchildren, Jeffrey (wife Danielle), Christopher(wife Nicole), Matthew (wife Tracy) Stephen, Thomas (wife Stefania) and his great grandchildren Ella, Louis, Giovanni, Kaitlyn. He is survived by many nieces and nephews.